DO YOU HATE MEETING PEOPLE? THEN THIS NEW TECHNOLOGY IS FOR YOU 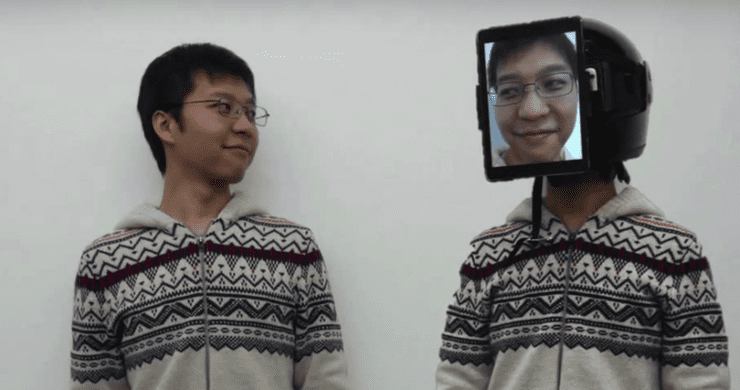 Thanks to the advancement in technology these days, it has become easier for people to connect to each other without actually being within physical proximity of each other.

The internet has allowed for video calls and what better way to make use of this feature than by making it into an antisocial device.

Basically, the ingenious service works like this; a ‘human uber’ will have a tablet strapped onto his or her face to attend events which you do not want to go to. Then, your face will be projected on the tablet but you could be anywhere you want but there.

You will command the surrogate person on where to look, what to do, etc. Of course, the whole point is to make it feel like you are actually where the surrogate is as you not only will the people there be able to ‘feel’ your presence, but you will get to ‘feel’ like you are really there too.

Certainly, such a complex machine-slash-service like that would take quite some time to develop properly. As for now, the ChameleonMask is limited to just sight and sound for now.

Without a doubt, such a funny yet somewhat revolutionary technology such as this caught the attention of netizens almost instantaneously.

MIT Tech Review writer Will Knight shared pictures of the ChameleonMask in a tweet and it garnered thousands of retweets immediately.

Many compared it to other ‘creations’ which have been shown on TV before such as the Phil Bot from Modern Family, Sheldon The Robot from The Big Bang Theory, and more.

Someone even compared the idea of this technology to the psychological thriller Get Out. If you haven’t watched this movie, it is totally worth it.

At any rate, creator Jun said that the ChameleonMask is ‘surprisingly natural’.

What do you guys think of this?