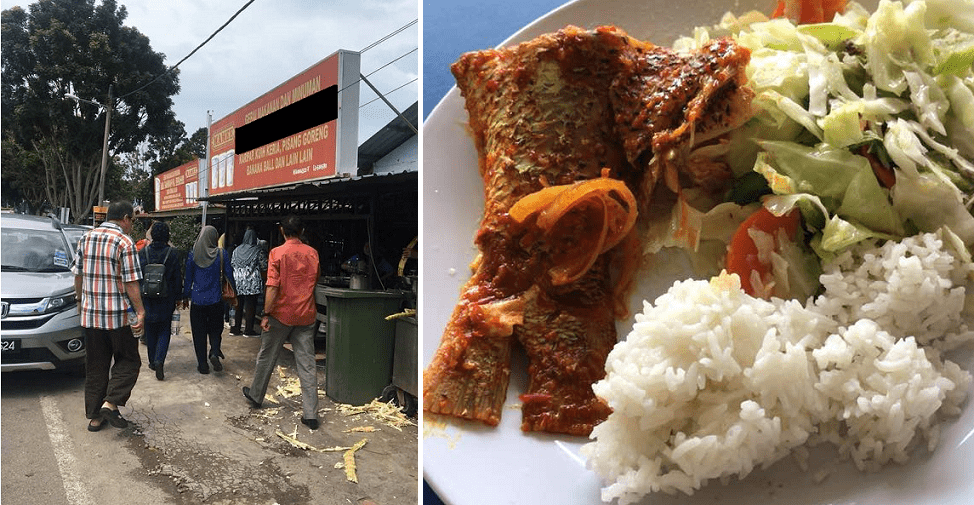 What was meant to be a fun weekend getaway for these four ladies ended up in being cheated and then later bullied by an asam pedas stall’s owners.

Sue Idris, 26, along with three of her friends went to Malacca and decided to drop by an asam pedas stall in Bukit Katil for lunch. The quartet barely had a good lunch as the environment was extremely hot and uncomfortable while the food was only average.

Unfortunately, the shock of their lives came when they saw the bill. For three fish tails, one fish head, one plate of cabbage, three plates of rice and three drinks, they were charged a whooping RM120!

Apparently, this shop was notorious for overcharging tourists.

This is a breakdown of the pricing:

In total, the four ladies were supposed to pay RM121 but the ‘kind’ stall cashier only charged them RM120 instead.

However, overcharging customers is one thing but the way the cashier rudely answered Sue’s friend was what made them very upset.

When asked about the reason behind the pricing, the man harshly replied,

When pressed further about the fish head, the man insultingly said,

Defeated by such crudeness, the ladies paid for their extremely overpriced meal and then went on with their day. However, worried that people might be duped like them, Sue decided to take to Facebook to share the incident.

Of course, after explaining everything, she decided not to name the stall publicly.

“For those of you who want to know the name of the stall, you can privately message me. Of course, [if I reveal the name] there will be people who accuse me of destroying someone’s bread and butter.

“So, I choose not to mention the name of the shop [publicly].”

Without a doubt, her post along with the video of her friends eating the food went viral. In only a day, the video has garnered almost 100,000 views!

Many netizens guessed the name of the shop and then went on to say that this shop is notorious for cheating tourists’ money. The reason is because the tourists will only visit their shop once before going back to their respective hometowns.

Soon enough, local news sites also shared the story to spread the awareness. Again, they did not mention the name of the shop either as requested by Sue.

Unfortunately, when Sue shared one of those articles on her Facebook page, owners and relatives of the owners of the stall bombarded the Facebook post with horrid accusations and even threats!

Massitah, one of the owners or relatives, said she wants to bring Sue to court to sue (lol) her for sedition. An owner, Has, said she would refund Sue the RM23 and then told her that poor students shouldn’t eat at her stall.

Has also threatened to report Sue’s ‘false accusations’ to the UiTM chancellor. Unfortunately, Sue has already graduated and been working for many years.

The cronies even accused Sue of “a Malay bringing down another Malay’s business” and then tried to make it into a racial issue.

Veeni Rama, 24, was one of Sue’s friends who patronised the stall. She said,

“The owner comes up and starts to talk about Malay people not supporting Malay business. Told my Malay friend to might as well continue eating in a Chinese shop.

“Instead of making it a racial issue, learn and reflect on the mistake that you’ve made instead of turning this into a racial problem.

“If you know you’re in the wrong, just admit to it and apologise instead of staying in denial and putting the blame on your customer.”

Meanwhile, Natalie Tan, 23, who is also one of the ladies who ate there, said,

“Do business but want to bring in personal matters in like they even asked if we are students because students got no money. Wtf.

“As a restaurant owner, they should accept the criticism and try to work on whatever they need to work on and not gang up with their family members to attack the customers that are just writing about their own experience.”

Perhaps, it is best not to visit a stall which overcharges their customers after all. Not only will the customer be cheated of their money, the owners will also cyberbully and post threats against a customer’s review.

P.S, there are many other places in Malacca which serves much better asam pedas and at a fraction of the above stall’s price too.

Remember to do your research ya.

Henry Golding; The Only Malaysian Who Made It Into TIME’s 100 Next List

We could not have been more proud for our local talent! Congratulations!