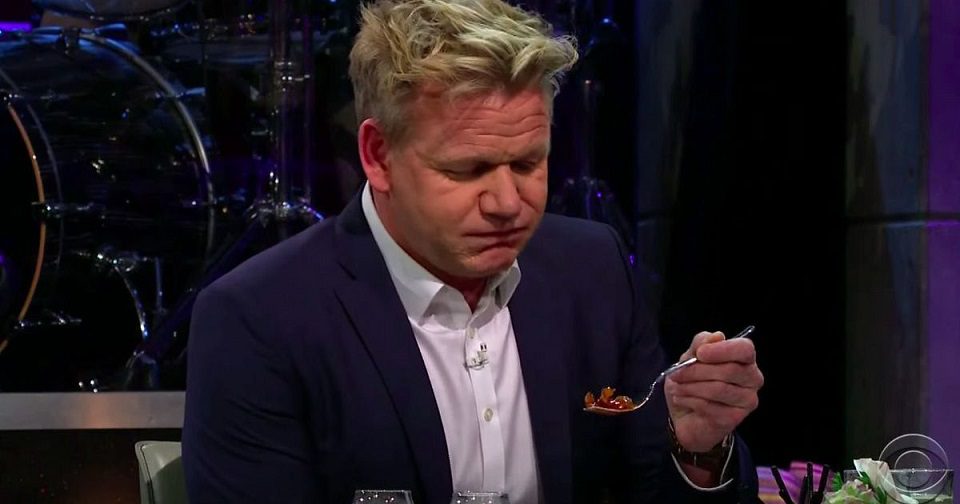 Gordon Ramsay is an name known all around the world. He is a celebrity chef, a restaurateur and everyone’s favourite television personality.

Love him or hate him, people get terribly entertained by his amazing vocabulary and creativity when it comes to cursing. ‘An idiot sandwich’ has somehow become the most popular insult ever since Ramsay said it in Hell’s Kitchen.

The guy is so famous in the food world that his taste buds are actually insured for millions of dollars!

But he unfortunately had to endure some of the freakiest foods ever during The Late, Late Show with James Corden in the ‘Spill Your Guts or Fill Your Guts’ section.

Basically, participants go up against James in a extreme version of truth or dare. Difficult questions will be thrown out at the opponent and the person must either answer them or choose to eat the nasty stuff.

They were in the third round of the game when Gordon decided to spice things up by adding the pickled pig’s feet juice to the chicken feet. This sparked a series of ‘marinating’ the foods with the juices and sauces available on the table.

On the fourth round itself, James offered the bull penis to Gordon but doused in the hot sauce. Then came the horrid question of which celebrity would Gordon not want back in any of his restaurants.

Gordon hesitates in answering but finally started off with “He’s American…” but before he could reveal the answer, he just said “f*ck it” and scooped a spoonful of the marinated bull penis into his mouth.

Unfortunately, the hot sauce was so spicy that the chef had to cough everything in his mouth out!

Even water wasn’t good enough as he even had to spit that out too. Shocked by the level of heat of the sauce, Gordon questions James on where he got the hot sauce from.

“It’s the hottest sauce we could find.”

Worried by how Gordon seemed to be in agony, James asked if he was alright only to have this reply,

Of course, being the tough guy that he is, the chef continued with the game anyways, creating more funny moments to catch.

Check out the full video of the game here:

Unsurprisingly, this isn’t even the first time they’ve played this game against each other. Well, okay it wasn’t exactly ‘Spill Your Guts or Fill Your Guts’ but what happened was, Gordon promised to treat James’ family to dinner in any of his restaurants if the comedian eats a steamed fish’s eye.

James kept to his part of the deal but Gordon kinda didn’t…so it was payback time.

Would you guys ever consume any of these foods? I know I won’t.

Whether it’s true or not, we just have to wait and see.