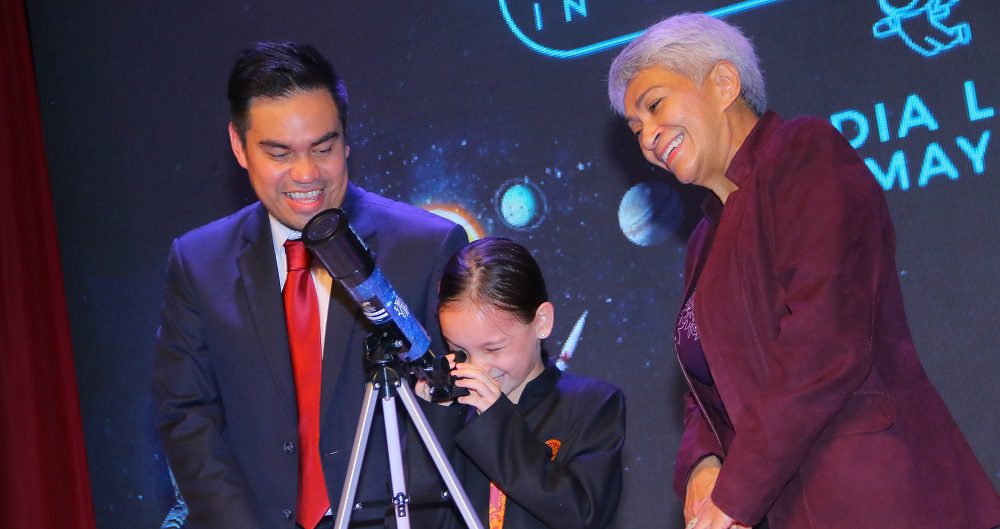 Leading up to the mid-term school holidays in May, KidZania Kuala Lumpur officially launched its “Science & Space” variable school-holiday programme, featuring specially-designed fun, engaging and educational activities centred on the theme of space and science.

The launch was officiated by Guest of Honour, Professor Emeritus Datuk Dr. Mazlan Othman, the first Malaysian astrophysicist and former Director General of the Malaysian National Space Agency (Angkasa), who also served as the Director of the United Nations Office for Outer Space Affairs.

On the Science and Space programme, she commented,

“It is certainly heartening to see corporate organisations such as KidZania Kuala Lumpur contributing towards the enhancement of learning of science and space.

“What is more inspiring is that in a child’s role as a scientist, they can aspire to solve world challenges such as climate change.

“This is important for the younger generation.”

“We’re certainly going all out to make this an unforgettable and most importantly, enjoyable experience for kids and their parents as well.

“Not only will they be entertained and engaged through the activities and workshops featuring a whole lot of fun, they will also learn so much about the sciences and our universe by participating in these activities.

“This highly concerted effort features the culmination of many organisations coming together at KidZania Kuala Lumpur with one purpose – to educate kids on the wonders of science and space by implementing fun and engaging activities.

“In this regard, I would like to thank all our partners who have come together so willingly to make this programme a success.”

KidZania Kuala Lumpur’s Science & Space programme runs from 25 May to 16 June 2019 to coincide with the school holidays in Malaysia and Singapore.

Staying true to KidZania’s ‘Learn Life Today’ philosophy which champions early ‘real life experiences’ through hands-on role-play engagements and opportunities, the Science & Space programme is specially designed to arouse and engage the curiosity of young and inquisitive minds through interactive activities and experiments to showcase the fun side of learning about science and space, while promoting skills among participants which include independence, problem solving and creativity.

Eight main activities and four weekend workshops will be featured amidst other establishment activities to take place around different locations within KidZania.

The main activities include a Junior Astropreneur Mini Bootcamp to introduce participants to “New Space” entrepreneurship while teaching skills such as problem identification, divergent thinking, elevator pitching and lean methodology, among others.

Meanwhile, kids will learn about new careers opening up in the new space industry as well as how to build their very own paper satellite in the Kem Angkasa activity.

Both activities will be conducted by Generasi Marikh Academy.

Another main activity for participants to look forward to is the Google Expeditions VR Experience involving a virtual tour using Virtual Reality (VR) goggles to destinations such as Mars and the Apollo Saturn Centre while being given a general introduction to astronomy.

The Build a Windmill activity by mangoSTEEMS, on the other hand, will allow participants to learn about wheel-and-axle machines in this science-based activity.

Meanwhile, the creativity and discovery of young participants will certainly be enhanced with the Improving Playdough Process, another activity by mangoSTEEMS, which reinforces the concepts of liquids and solids.

The Science Bridge Academy will be conducting two main activities.

The Making Galaxy Slime activity will teach kids about chemistry, the states of matter and how the composition of materials are made out of atoms and molecules – all by concocting their own galaxy slime.

Similarly, kids will also learn about hydrophobic properties as they make their own moon sand in the Making Moon Sands activity.

KidZania Kuala Lumpur’s Science & Space school holiday programme will also feature four weekend workshops – the Galaxy Bathbomb workshop by Tanamera where visitors learn to make their very own galaxy-themed bath-bomb; the Astronaut’s Chocolate Pudding workshop by the Malaysian Palm Oil Council (MPOC), on how to make an astronaut’s pudding; the Dodecahedron workshop by Faber-Castell, to learn about geometry as they make a dodecahedron – a three-dimensional figure with 12 faces; and the Launch-a-Rocket workshop by F&N, where participants get to construct a rocket and launch it using groceries which can be found at home!

KidZania Kuala Lumpur will be offering up to 40% off on tickets so that more people will be able to participate and enjoy the Space & Science programme.

More information about the programme and further details about activities can be found at KidZania’s website.