Former Prime Minister Datuk Seri Najib Razak was slapped with three counts of criminal breach of trust and one count of abuse of power for gratification involving RM4 billion from SRC International Sdn Bhd since 2011.

However, no pleas were recorded as the case will be transfer to the High Court.

Clad in a dark suit, the Pekan member of Parliament appeared calm when the charges were read out to him before Sessions Court judge Datuk Zainal Abidin Kamarudin.

The two, who sat in the public gallery, were composed and had refused to speak to the media when approached after the proceeding. 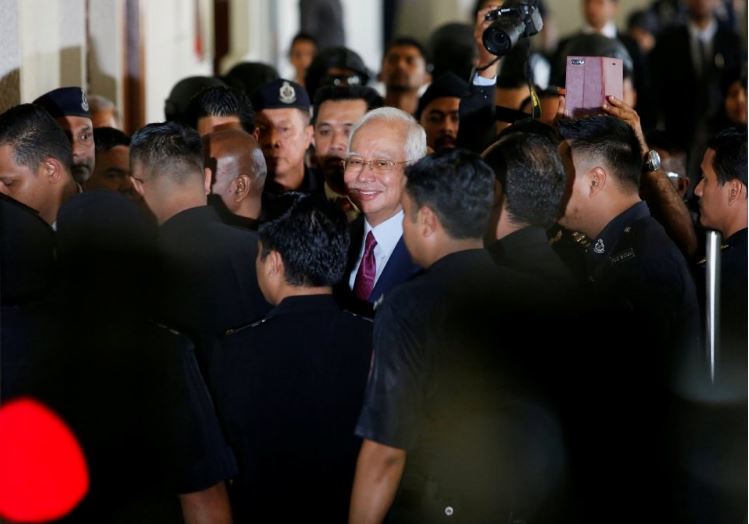 Najib , who arrived at about 8.30am at the court complex, was heavily guarded by the policemen as pressmen and photographers crowded around the former premier at the court’s corridor.

Najib, as the public servant, was alleged to have misappropriated RM27 million, RM5 million, and RM10 million money belonging to SRC International when he acted as its advisor.

The offence falls under Section 409 of the Penal Code which carries maximum 20 years’ imprisonment and whipping, upon conviction.

He was also charged with abuse of power to secure RM42 million loan from The Retirement Fund Inc (KWAP) for SRC International.

He was also charged with using his position for a RM42 million payout to himself of when he took part or was involved in making the decision to provide government guarantees for a RM4 billion loan from the Retirement Fund Inc (KWAP). The charge under Section 23 of the Malaysian Anti-Corruption Commission (MACC) act carries a sentence of up to 20 years in jail, or a fine of RM10,000 or five times the bribe amount, whichever is higher.

All the offences were allegedly committed at the Prime Minister’s Office in Putrajaya and AmIslamic Bank Berhad here between December 2011 and March 2015.

Attorney-General Tommy Thomas who led the prosecution team asked for the trial to be conducted in English.

The case was later sent to the High Court to have his plea recorded and for the bailing process.

Najib had been summoned twice, on May 22 and 24, by the authority to record his statement over graft allegations related to SRC International Sdn Bhd.

He has consistently denied any wrongdoing over the allegations since the scandal erupted in 2015.

On June 5, Datin Seri Rosmah Mansor, Najib’s wife, was also called in by the graft buster to have her statement on SRC International recorded.

SRC was created in 2011 to pursue overseas investments in energy resources and was a unit of 1MDB until it was moved to the Finance Ministry in 2012.

The 1MDB Special Task Force was set up late May. Its duties include asset recovery, retrieval of money and assets siphoned off from the 1MDB state fund, and taking action against those involved in criminal activities relating to the case.