CAN YOU HANDLE THE HEAT? HERE’S THE 10 SPICIEST KOREAN RAMEN

More and more people are adopting the South Korean ways and even consuming the foods like natives. One special thing about their foods is how a lot of them are kinda spicy.

While Malaysia has got our favourite chilli padi and sambal, South Korea has got their gochujang (고추장 – fermented chilli paste). This paste is used in almost all of their dishes, typically making their foods spicy and red in colour.

There is a super spicy Korean noodles that have gone viral recently called Buldalk-bokkeum-myeon (불닭볶음면). Many people have been taking up the challenge of consuming these burning hot noodles to see just how much one could stand the heat.

According to Eggbun, here’s the 10 spiciest Korean noodles out there based on the scoville score.

This is probably the most common South Korean instant noodles in the world. Before the Spicy Korean Ramyeon Challenge went viral, international stores would usually only carry this instant noodle brand.

Though some people have commented on how terribly hot the Shin Ramyeon is, the noodles are actually rather mild. Perhaps it is the combination of the spices and the hot broth has got people thinking it is unbearable.

Jjal-bibim-ramyeon is basically the instant noodle version of the famous bibimbap (Bibim Rice). The rice version typically comes in rice served with various raw vegetables, a fried egg and a dollop of gochujang.

The noodles version is much simpler. Restaurants would typically serve this noodle with raw julienned cucumbers and hard boiled eggs on top. The fun part about this noodle is, you could always add any other topping as you wish.

The namja-ramyeon or better-known as men’s ramyeon is probably one of the most misogynistic instant noodle brand out there. Apparently, the marketing technique is that the heat is only bearable for men.

Even the ad for this noodle is an overload of manliness. However, before any feminists start a war against the instant noodles here, the whole concept is merely but a fun way of selling their product.

As for the taste, many reviews have commented that the broth tastes similar to Shin Ramyeon but richer. 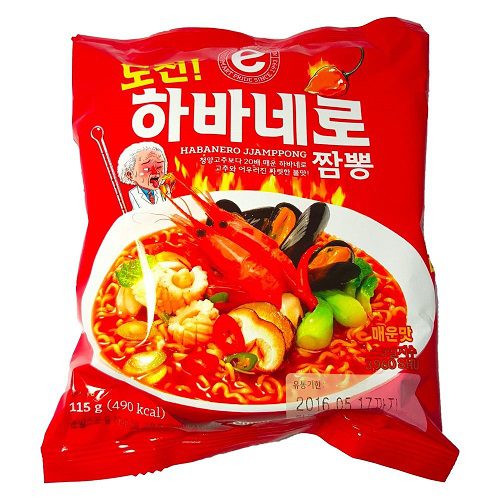 The habanero-jjam-bbong is a seafood based broth with the promised heat level of a habanero. Unfortunately, an actual habanero pepper has got a scoville level of about 100,000 to 350,000.

Of course, the noodles are still pretty damn hot. It’s hot enough to make one crave for water while eating it.

The name of this instant noodle is literally “Really, really spicy!”. This noodle indeed is pretty spicy and can you imagine how much more painful it will be on the tongue when you’re consuming the broth right near boiling point?

You definitely need a glass of water or milk while eating this.

Buldalk-bokkeum-myeon is the viral instant noodles that have got the world crazy about eating mighty hot ramyeon. It is commonly called the Samyang (the brand) noodles or fire noodles by none Koreans.

Though this noodle has been considered extremely spicy for many people, it is actually pretty mild compared to the rest of the list!

Yeul-ramyeon is a pretty accurate name for this noodle. The hot noodles have a lasting heat which will follow you through your digestive track for the rest of the day.

The broth is beefy and rich so it definitely tastes like a proper bowl of noodles rather than a typical instant noodle meal.

Many people might confuse the habanero instant noodles with the habanero spicy noodles. However, you can definitely tell the difference in level of heat here as the black packaged-noodles are 2,000 scovilles hotter than the red one.

Still, to compare it to an actual habanero pepper is pretty far-fetched though. Gap ramyeon or teum-se-ramyeon is absolutely not something we should play around with. It might leave a gap in your stomach after consuming it thanks to how super spicy the noodles are.

Prepare yourself for this. Make sure you’ve got loads of milk or water by your side as you eat this noodles. Be prepared to feel a fiery burn throughout your abdomen and finally…the end will probably hurt like hell too.

It is also commonly called the nuclear noodles due to its extreme heat. This noodle is not something you should joke around with as it will leave your insides burning for a really long time. Take this with precaution!

These instant noodles are definitely no joke for those who enjoy eating hot stuff. Though some of them are hard to come by in our local supermarkets, we could always try to find them in marts around the Korea Town near us. 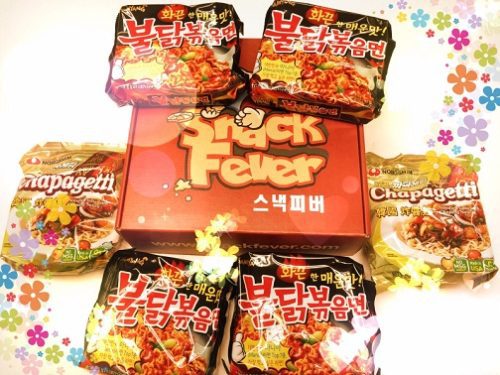 Alternatively, this online shop called Snack Fever which sells a special array of snacks through their various snack boxes. To get an assortment of ramyeon monthly, you can subscribe to their RamyunFever box.

Remember to save aside enough amount when exiting the country.