LADY CRASHES CAR INTO STAIRCASE AFTER SEEING COCKROACH IN CAR 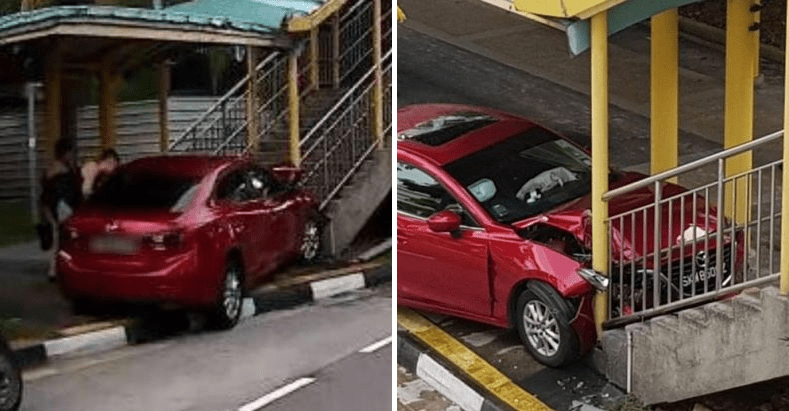 Cockroaches are probably one of the most unloved, unwanted, and unneeded creatures on earth. Though there have been some scientific research which proves the usefulness of certain species, that does not mean any of us want them there.

In fact, some people despise the insect so much that they would freak out and run away.

For this Singaporean lady, there was no where to run as she was driving her car when she saw a cockroach crawling inside!

Unfortunately, as the 61-year-old woman suffered such a shock from the sight, she drove her car straight into a pedestrian bridge staircase. According to The Star, the incident took place at Jurong East Central, Singapore on January 26, 2018 at about 7.30am. She was driving her red Mazda towards the Science Centre Road when she lost control of it.

The crash was so bad that the car’s front bumper was crushed and the airbags inflated. Thankfully though, she was conscious throughout the incident.

Her son arrived at the scene not long after the accident. She was brought to the Ng Teng Fong General Hospital for treatment.

Police are still investigating the incident. Cockroaches in cars are not that uncommon actually. If you normally bring food into the car cockroaches will be attracted to your vehicle. Even if you just tapau the food and not eat inside is enough to lure them in.

There are several ways to get rid of or prevent these pests from making a home in our cars.

Fumigation is basically fogging your car but without the harmful chemicals like what authorities use to get rid of mosquitoes. So it is safe for your car and does not leave any residue smell.

You can find this service in many car wash shops.