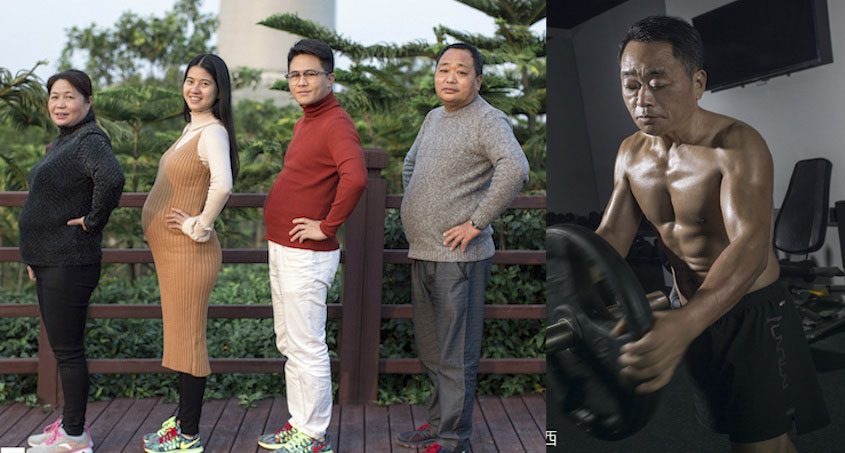 Losing weight isn’t easy, especially when we don’t have the inspiration to do so. However, the most encouraging thing would be when someone actually decides to get fit WITH us.

Instead of being vocally berated into doing something, having the person join us in the gym is much more motivating.

As for this Chinese family, they all got really fit in 6 months thanks to the encouragement from the son, XY Jesse. Jesse is a 32-year-old photographer who was also about to become a father because his was pregnant.

Because they were expecting their child, the couple invited Jesse’s mother to help them go through the pregnancy as well as to take care of both her and the baby during the confinement period.

They also decided to bring their father to live with them. The young man wanted it to be a great chance for the family to become closer with each other. The father used to run a small bamboo factory, Next Shark reported.

However, the photographer noticed that his father had issues with alcoholism and is overweight. His habit in drinking developed after he suffered terrible losses in his business.

The father was also pretty down all the time. Jesse decided to put the whole family into a weight loss program.

Of course, everything started out small and simple. The first step was speed-walking and they gradually moved into jogging. Then, they start working out in the gym as well.

As you can see from the pictures above, not only did they turn into total hotties, but they look much happier as well.

Their training began on March 10, 2017 and was supposed to end on September 30, 2017, but because they have learned to enjoy the new lifestyle, they decided to continue it for the rest of their lives.

So, is it true that the said K-pop idol is actually innocent? So, he’s been falsely accused all this while?