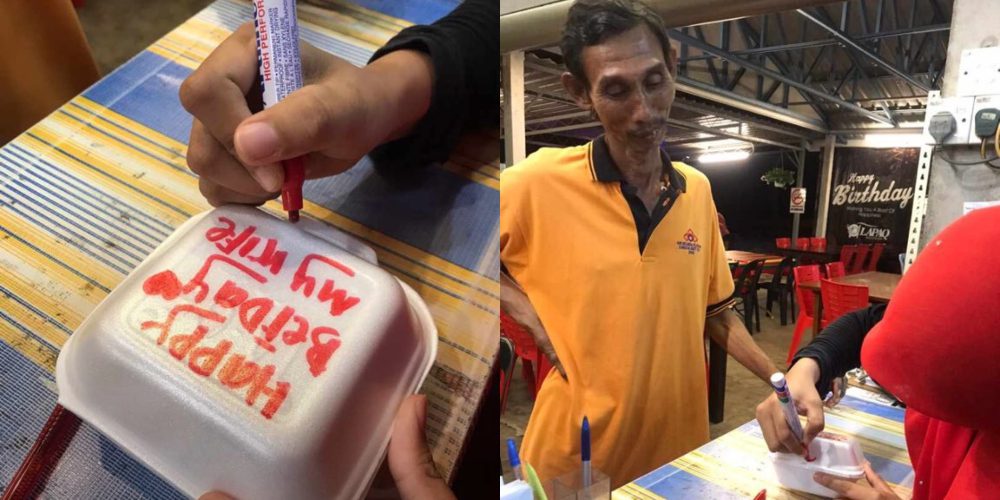 ❝ Married men out there, please appreciate your wives. Today, my schoolmate whom works at a western restaurant served a man who looked like an “uncle”. He said he couldn’t find time to go buy his wife a cake, so he simply just ordered a burger for the wife. Whatever it is, dust has definitely came into my eyes. ❞

It was believed that the man who looks elderly was planning on celebrating his wife’s birthday. Unfortunately, he couldn’t find the time to buy a proper cake for her. Maybe he was too occupied with work; he opted for a simple street burger instead.

This immediately caught the attention of netizens as thousands upon thousands retweets and likes were given! The Tweet became so big that even Secret Recipe Malaysia themselves quote retweeted it and expressed their intention of finding the elderly man.

Hey Twitter, do your magic. we are looking for this pakcik and his wife, we want to give them a treat! ❤ #SecretRecipeMY https://t.co/586uS5UiAJ

Thanks to Malaysians’ eager supports, the uncle was identified and sucessfully contacted in less than 24 hours!

Update: We have found the pakcik all the way from Yan, Kedah! You guys did great and we thank you for everyone’s effort!! We will see him & his wife at our Sungai Petani outlet this Saturday ❤️ https://t.co/EL19Hlit2I

If you’re as interested as we are to what’s going to happen this Saturday, stay tune with us and we’ll update you on the wife’s surprise.